Astounding new evidence has been unearthed in Israel that could confirm the biblical story of King David.

Until now, almost nothing has been found  that would prove the biblical account of a shepherd boy from the 10th century BC who slew the giant Goliath and went on to become the King of Israel who founded Jerusalem.

But today Hebrew University archaeology professor Yosef Garfinkel announced the discovery of a tiny, but potentially invaluable, piece of pottery at the site of the ruins of an ancient fortified city south-west of Jerusalem dated to the time of King David. 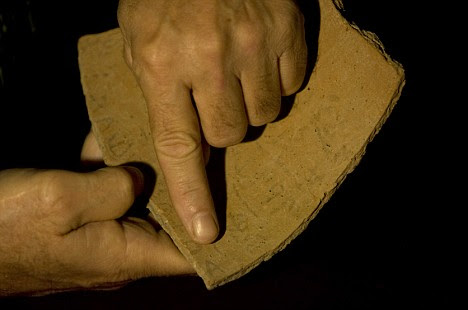 Garfinkel said that it carried the earliest-known Hebrew inscription, some 850 years  earlier than the Dead Sea Scrolls.

Scholars are still trying to decipher the full text of the inscription, but Garfinkel said they are excited at the prospect of a link to David because they have already translated the words for "king," "judge," and  "slave" , which he said suggested it was some sort of official note from the time of his reign.

Until now, scholars have been unable to say whether King David was indeed the  heroic, psalm-composing monarch depicted in the Bible or the local and unimportant leader of a small tribe. 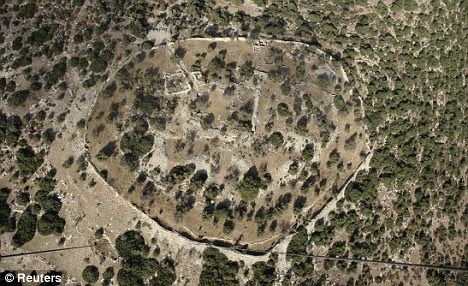 The archaeological site called Elah Fortress, or Khirbet Qeiyafa, seen in an undated aerial photograph, where the shard was found

Only one biblical-era inscription with the words "House of David" has ever been  discovered, leading some scholars to question whether King David existed at all.

The pottery fragment was inscribed with five rows of text in black ink divided by black lines written in an early Hebrew-Canaanite script.

Archaeologists also found lamps, pottery jars and other items. Carbon-14 tests  carried out at Oxford University dated them to the 10th century BC, the era according to the Old Testament of King David and his son Solomon, who built the Temple in Jerusalem.

The ruins of the Elah Valley fortress was discovered  in 2003 near the modern Israeli city of Beit Shemesh in the Judean Hills, south-west of  Jerusalem. The huge complex is spread over nearly six acres and surrounded by a 700-metre long city wall built with stones weighing up to eight tons each. 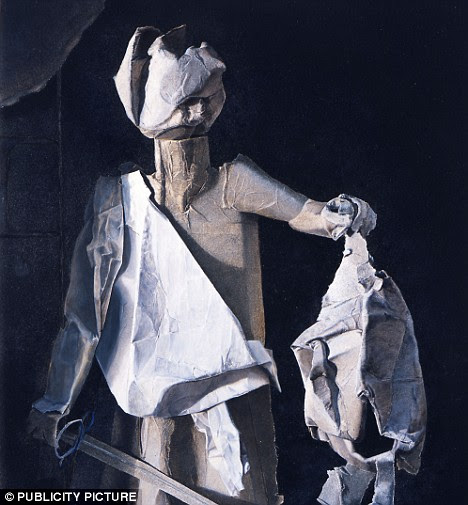 Bible come true? David with the head of Goliath by William Daniels 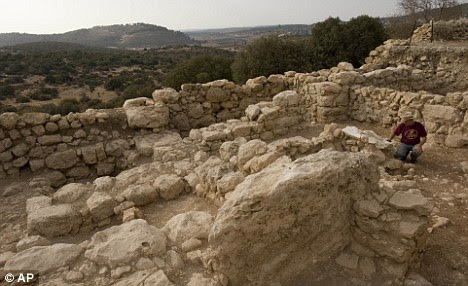 Yossi Garfinkel is seen at the excavation site

The fortress would have controlled the ancient trading route from Jerusalem to the coast and overlooks the plain where David engaged in his legendary mortal combat with Goliath, giant champion of the rival Philistines.

Goliath's home town of Gath was unearthed just a few miles away to the south.

"The chronology and geography of Elah Fortress create a unique meeting point between the history, historiography and origins of the early Davidic Kingdom," said Garfinkel.

"This is the oldest Judean city  uncovered to date, and its very construction has unprecedented implications on our understanding of this era."

Garfinkel said the sophistication and size of the city suggested it was part of  a strong, centrally-planned kingdom.

It has been a busy week for archaeologists searching for King David and his family. In Jerusalem, a researcher said she had found an ancient water drain mentioned in the Bible as the route used by David's forces to capture the city  from the Jebusites.

In Jordan, scholars said they had uncovered an ancient  copper excavation site that tests showed could be the legendary King Solomon's Mines.